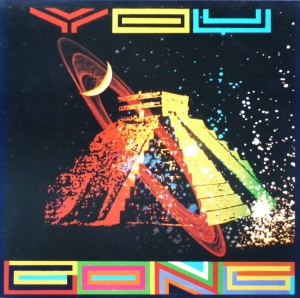 I was getting really dissatisfied with trying to play everything myself when I was recording and decided to get a few others involved. David and I now spent all our time together at school so he was the first to join me. We’d already written the words for a “musical” – his offerings were always far more unusual and imaginative than my prosaic ramblings, but together they kind of worked, so we set about putting music to them. We referenced the “Faust Tapes” album and, obviously, Gong and spent many Saturday afternoons in our back room at home, creating soundscapes using guitars, cassette players, kitchen utensils and the electric organ mum had bought (and hated) along with random radio broadcasts and recordings of his mum talking to the infants at the school where she taught. Our Neil joined us sometimes if we had the drum kit at the house and, on occasions, his mate Pete would come and bring various electronic gizmos that he’d built. He was really into that kind of stuff and made all sorts. He once made a kind of microphone pad that you put on your throat and coughed! We had some fantastic times and thought we were being really exciting, even getting what we considered to be quite polished recordings. That was until we heard the new Gong album.

“You” the final part of the Radio Gnome trilogy (following “Flying Teapot” and “Angel’s Egg”) was Gong’s masterpiece. Featuring the “classic” line up, everything about it was perfect; the playing, the songs and the mythology. I’d never really been into music about elves, wizards and dragons (and the kind of things Yes were singing about at length) but Gong were different. We all knew that the Pot Head Pixies in Dingo Virgin’s (Daevid Allen) tales weren’t actually pixies in The Lord of The Rings sense but instead, just a euphemism for normal, everyday hippies who enjoyed getting stoned. And, however space-age it sounded, all they promoted was a peaceful, tripped out life on earth.

Musically, all the best elements of Gong were present but finely honed. There were long, smooth instrumentals with fluid bass-lines and tuneful percussion providing the backing for Steve Hillage’s expressive guitar solos, Bloomdido Glad de Brass on sax and sparkling synthesisers played by Hi T Moonweed. (Even the nicknames were brilliant!) In between these pieces was the narrative, telling the story of Zero The Hero and his adventures with the Octave Doctors and PHPs travelling the galaxy in their flying teapots.

“Isle Of Everywhere” is for me, the stand out track, closely followed by the heavier “Master Builder” featuring the glorious Om riff.

I bought the album for £2.59 after mum and dad agreed to pay half and played it incessantly, usually laying on my bed with my eyes closed. As ever, the sleeve was important. It felt substantial somehow, colourful and intriguing. It was only many years later that I discovered where the pyramid on the front cover was – Chichen Itza in Mexico. I’ve since been there and climbed it, all the while singing “Master Builder” to myself. You never really leave the Gong family. Gong is one and one is you…