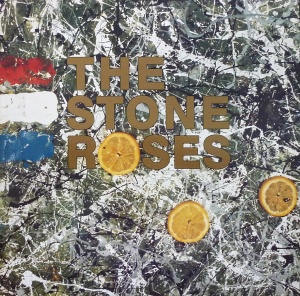 All my favourite bands manage to blend a variety of styles, to pick ‘n’ mix the best bits from their influences and create something new.

Shimmering sleepily, but somehow dangerously, the first Stone Roses album starts with the superb “I Wanna Be Adored”: musically urgent but lazily sung. This is followed by a tense, rumbling bass-line before opening up into the unbridled joy of “She Bangs The Drums”. Throughout the album the songs are delightfully relaxed, but with soaring choruses that make you smile. The lyrics, too, are clever and knowing, if displaying something of a tendency towards megalomania (“I Wanna Be Adored”, “I Am The Resurrection”) but always chilled – a slacker’s revolution? The Stone Roses fused straightforward rock rhythms with cool jazz-funk and topped it off with West Coast harmonies to eventually, on the last song, create a whole new style of music that was the beginning of ‘baggy’, a beat that I immediately began to incorporate into some of my own songs, of course.

Like some kind of musical magpie, I was listening to this, learning to play that, and all the while attempting to construct songs of my own from the various diverse elements I’d collected. I would sometimes have a Smiths-style chorus played on a scratchy guitar over a hip-hop drum beat and synthesiser bass line, interspersed with cut-and-pasted samples from a country music classic. At other times, I would just try and write a standard pop song or a tune with a disco beat. I painstakingly pieced these compositions together on my Tascam four track recorder before finally putting the vocals on. And that’s when everything always went wrong. It was simple: I didn’t like my voice. It wasn’t the sound I had in my head.

In Justin, I found that sound. From the first time I asked him to record a vocal for me – a version of “Blue Moon” that I’d mixed with the guitar riff from “Bad Moon Rising” and clips from the “American Werewolf in London” film, it all fell into place. Then, there was no stopping us. I would play him the track, sing him a rough idea of the tune I’d written and show him the words. We’d usually have a couple of practice takes then record it for real. We occasionally had to do the odd line again or maybe redo a verse perhaps, but it never took more than an afternoon to do two or three songs and it sounded fantastic. We really had something. Amongst others, we did two versions of “Can’t Help Falling In Love” and one of “The Boy With The Thorn In His Side”. There were originals too, our favourite being “The Day The Earth Stood Still”. I’d become obsessed with the old black and white film, having seen it one afternoon. I’d written what I thought was a killer bass line and ‘hook’ and come up with a chorus using the phrase, “The day that I found you was the day the earth stood still” to give the emerging song some kind of narrative, which was completed by adding cut-ups from the film’s audio track. I was particularly proud of how I made the words “Klaatu barada nikto” fit into the opening build up. It was also the first time I tried triple tracking Justin’s voice to add harmonies to the chorus. Our first version was around six and a half minutes long – not your average pop song – and was recorded during the Easter holidays when I really should have been getting prepared to start my new job.

I’d begun looking around for a new job as a Deputy Head teacher and had managed to get a couple of interviews, so my application letter was obviously pretty good. However, I wasn’t getting the jobs so something was going wrong. It was whilst walking through Sheffield town centre one Saturday that I had an epiphany. There were some people selling the Socialist Worker magazine. Clearly, no one was buying it because, I decided, the vendors looked like, well, like socialist workers – like people who’d never worked in their life. They needed, I reasoned, to smarten up their image a bit, maybe wear a suit. If they did that, they’d get more customers and have a greater chance of getting their message across.

At interviews I’d always worn a sports jacket with ‘proper’ trousers and looked smart enough but now I realised – those on the interview panels were basically middle-aged, traditionalists who were impressed by suits. My natural penchant for subversion of course came into play. As he was leaving school, Justin had just bought a new suit for his job interviews and he was about the same height as me, so, for my next try, I borrowed the suit. I’d also done a bit of research and knew the head teacher’s husband was a Labour councillor so got a red tie and was all set for world manipulation!

A few days before the interview I went to look around the school, Roughwood Junior School in Kimberworth Park, where the head showed me the room where it would all take place and explained the set up. “And there’ll be a table here where you can put your bag with all your things in…”

The day came and I arrived at Roughwood. Suit borrowed from a school leaver, red tie and borrowed briefcase with…my sandwiches in. I was never asked to explain, I got the job. I’d won the image game – a slacker’s revolution?