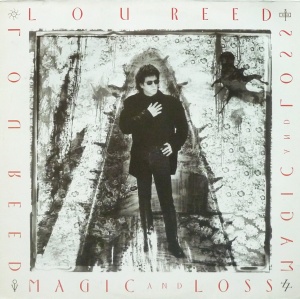 “Magic And Loss”, Lou Reed’s new album was advertised on Radio Hallam early in the year. The song featured in the ads was ‘What’s Good’ and it certainly did the job, I was hooked immediately. I’d not heard much from him for a few years and it was completely at odds with the current style of music I was listening to, yet it was somehow familiar: clean, plain chords, fretless bass and simple drums topped with typical Lou Reed not-quite-singing vocals. The lyrics, too, are what you’d expect, making ordinary situations into urban poetry, this time it was about his friends dying of cancer. He manages to make it poignant and intimate yet graceful and uplifting, turning loss into magic: “Magician Magician take me upon your wings and…gently roll the clouds away” from ‘Magician’ and “I see you in the hospital your humour is intact, I’m embarrassed by the strength I seem to lack” from ‘No Chance’. My favourite track is ‘The Sword Of Damocles’ with its insistent acoustic guitar, rolling drums and simple but stirring strings. “To cure you they must kill you, the Sword of Damocles hangs above your head”.

In April, Justin and I had enough material for Short Supply to venture into the studios again. The Powder Room had closed down (we heard the people who were looking for Jason had found him!) so after looking around I chose Priority Studios, which were located in an old warehouse in Sheffield, mainly because it was relatively cheap. It was run by Steven Singleton (formerly of ABC) and a bloke called Andy Lewin, whom I realised used to live round the corner from our house on Elm Lane. He was a year younger than me and even though we’d not met for about twenty years, we both recognised each other the minute we met. We recorded five songs and got a much better sound than previously. As well as being the engineer, Andy acted more like a producer, offering suggestions and subtle ideas that really added something to the vision I had.  We still pre-programmed the drums and bass so it was recorded pretty quickly. He was also much more proficient at using sampled sounds and suggested we use the drum sound he’d got from ‘Alright Now’ by Free to give the songs a more realistic ‘live’ feel. They sounded great and we wanted to do something with them. I didn’t have the money for another single so we had a cassette produced, which I sent to loads of record companies. I’d been reading up about submitting material to people and decided to send it to various publishing companies too. We’d been rejected so often that I was really quite shocked when I received a letter from one of the places offering me a publishing deal, saying they were impressed with the songs and they would like to try and ‘place them’ with other artists. Much as I regret it now, at the time we were only interested in performing them ourselves, so didn’t take them up on the offer. Oh well, you live and learn.

The Holy Rollers were still going, playing every weekend and still getting great reviews in the Rotherham Advertiser. We’d started playing “Rawhide” as a last song (like The Blues Brothers) mainly to try and get people to stop dancing so we could get off home. It didn’t work, they loved it and danced to that too. I’d recently bought an electric mandolin and more as a joke than anything else suggested playing some Irish tunes in the last spot to see what the audience would do. They danced! It seemed we could do no wrong, but we knew things were beginning to change.

One Saturday, I’d been feeling a bit rough but played a gig anyway and got through it ok. We weren’t particularly late home but I was shattered and went to bed straight away without the supper I usually had. In the middle of the night, I woke up sweating and shaking but, more worryingly, with pins and needles down my left arm and bad chest pains. I tried to breathe deeply but it wouldn’t go away so I had to wake Wendy. She immediately drove me to A&E at Rotherham hospital where I was quickly rigged up to various machines and rushed to the Coronary Care department. In the end I was there for four days, wired up to a heart monitor and having regular blood tests where they concluded that it wasn’t a heart attack but a virus that had affected the muscles around my heart. I’d even stopped being scared after the first day and would delight in seeing how I could get my heart-rate up (have a wee) and then if I could keep it steady at a given rate. A couple of months later, I had to have a treadmill test to check everything out. They decided I was possibly the fittest person they’d ever had there! After the summer holidays it was back to work and gigging as usual until things changed again.

Justin had met a girl and his behaviour was becoming increasingly erratic: so much so, that towards the end of the year it was becoming unworkable. We always used to pick him up in the car to go to gigs, but on a number of occasions we had to go looking for him, finding him hiding round the back of his house. Twice he didn’t turn up at all and because we didn’t want to cancel, we had to muddle through with Grahame and me singing as much as possible. By the end of the year it had finished. The magic was lost.